Indium gallium zinc oxide (InGaZnO or for short IGZO), first proposed in 2003, has become a leading candidate for transparent semiconductor thin film transistors (TFT), and rapidly driving innovations within TFTs due to its high performance and compatibility with diverse flat panel display (FPD) technologies. Interest in IGZO is due to its high electron mobility (> 10 cm2/Vs) and high optical transmission (> 75%) over the visible range. These benefits would be realized if good uniformity of IGZO over large areas is achieved at low deposition/processing temperatures.  Industrially, majority of the IGZO films are deposited by sputtering mainly due to its compatibility with existing production-scale fabrication infrastructure. Both, AC/sine wave and bipolar pulse dual magnetron sputtering (see Figure 1, for comparison) are commonly used since they offer similar advantages such as similar duty cycle and mitigation of the “disappearing anode” effect. While both methods are theoretically comparable, they differ substantially in the hardware requirements. Additionally, little is known about their effects on the film qualities deposited under similar deposition conditions.

This was the aim of this R&D project for the new Customer Solutions Lab – to study if the deposition of IGZO by either AC/sine wave or by bipolar dual magnetron sputtering affected the film properties (see Figure 1). 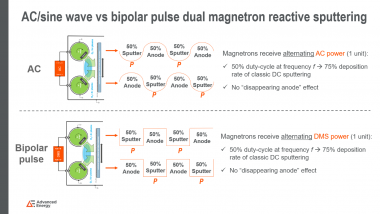 Figure 1. Shown is a diagram of AC/sine wave [PEII Series power supply (up to 10 kW) was used] and bipolar pulse [Ascent DMS AP30 power supply (up to 30 kW) was used] dual magnetron sputtering (DMS) configurations with- rotatable (shown in diagram) or planar magnetrons can be used (planar targets used in this study) and an oxygen O2 and argon Ar plasma was applied. Each power configuration offers similar benefits, although the waveform (as shown) are different. The important difference is that the bipolar pulse or “square wave” provides more stimulating frequencies as observed by Fourier Transform (not shown).

Thus, IGZO films were deposited via the two aforementioned power supply configurations on a FPD inline glass coater at an satellite lab site. For both the power supply configurations, equivalent power P (= 10 kiloWatts (‘kW’)) was used to generate the two plasmas at two different power supply frequencies: f = 20 and 40 kiloHertz (‘kHz’). The films were deposited on glass substrates using a gas mixture of argon and oxygen, and the oxygen concentration was varied to 4%, 7% and 12% (process centering around 7% O2 was suggested by a proprietary AE customer, which manufactures FPD’s). Process pressure was controlled by varying total gas flow rate in conjunction with an unthrottled turbo molecular pump at maximum pumping speed. No heating was intentionally applied to the glass substrates, except for the heat generated by the plasma itself on the substrate during each deposition.

The film properties were measured in the Lab’s materials characterization laboratory and at Fraunhofer IST in Braunschweig, Germany. With the help of state-of-the-art analytical tools, detailed characterization of the IGZO films was possible using methods such:

We observed that among all the films, only the ones deposited by the bipolar DC configuration at both 20 and 40 kHz were visually ‘clear’. This was validated by OTS measurement showing the ideal peak transmittance position lpeak at 550 nm, which is the center of the visual spectrum 300 to 750 nm (see Figure 2). The peak position was also dependent on the oxygen composition in the gas mixture. As the %O2 increased, the material’s lpeak is “red shifted” to larger wavelengths. 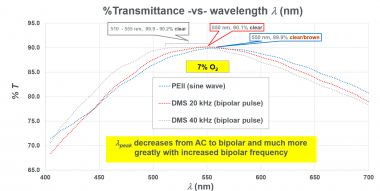 Figure 2. Optical percent transmittance %T of IGZO films deposited by AC/sine wave and bipolar pulse at a %O2 = 7% with all other parameters the same. All three samples are well centered in the visual spectrum at  = 550 nm. Visually clear films were only deposited using the bipolar configuration. Note: peak wavelength peak was found to increase with increasing %O2 relative to the total gas mixture flow rate.

While all the deposited IGZO films were predominantly amorphous ‘a-IGZO’, as confirmed by the XRD measurement (see Figure 3’s inset), the presence of a broad peak for (220) crystal plane suggests the presence of partial crystallinity. The taller (intensity) and narrower (full width at half maximum, ‘FWHM’) the peak, the more crystalline the material and correspondingly the higher the crystallinity factor (Q). Thus, the film with the highest Q-factor was the a-IGZO deposited at %O2 = 7% with a bipolar pulse power supply frequency of 20 kHz (see Figure 3). 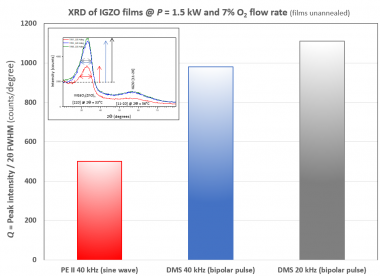 Figure 3. Crystalline quality factor Q of the three a-IGZO films deposited at 7% O2 (optically %T centered at = 550 nm) by each technique are shown. The highest Q-factor crystalline film was deposited by bipolar pulse at 20 kHz.

The a-IGZO films deposited by bipolar pulse at 20 kHz appears to be of better quality than that deposited via AC/sine wave at 40 kHz. In summary, although the deposition method (in theory) provide similar benefits, the choice between using either AC/sine wave or bipolar pulse dual magnetron sputtering should also be weighed based upon the material characteristics desired, besides based on fabrication infrastructure. Without doubt, this will involve design of experiments (DOE) plus investing time and effort on material characterization. One of the aims of the Lab is targeted in this direction.

The Lab team plans to continue with the experiments to compare AC/sine wave versus bipolar pulse deposition of a-IGZO films over the next several months. Further on, promising results have been obtained from AE’s patented Dynamic Reverse Pulsing™ (“DRP”) configuration wherein a doubled  deposition rate as compared to even bipolar pulsing – without adding much substrate heating or degrading the film’s properties – have been observed in our other ongoing studies. The Lab team will extend our a-IGZO R&D efforts to include our DRP configuration as well in our ongoing studies to improve deposition configurations further.

As an R&D scientist at AE, with past experience in sputtering and thin film analysis, I am involved with the research activities of the Customer Solutions Lab in Karlstein am Main, Germany. 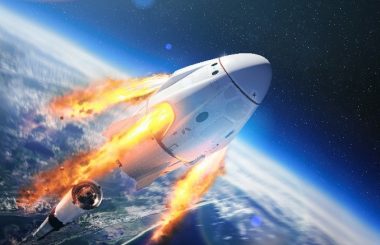 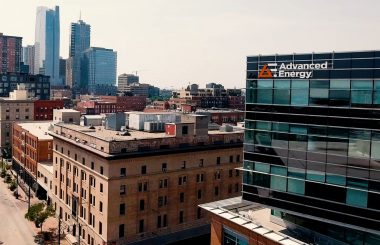 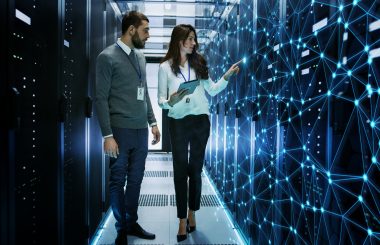